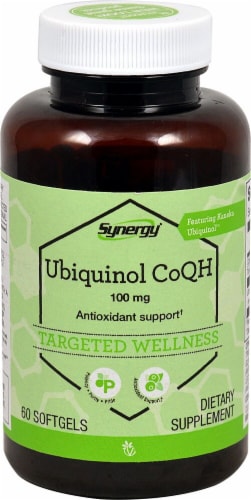 CoQ10 is a fat-soluble, vitamin-like compound found in every cell of the body. It's used by the mitochondria ("the power plants of cells") to produce energy. CoQ10 is found in highest concentration in cells of organs that require large amounts of energy, such as the heart.

CoQ10 also functions as a powerful antioxidant.* Antioxidants help protect cells from free radical damage. Free radicals are harmful compounds generated during normal body processes, such as breathing and digestion, but also upon exposure to environmental influences such as UV sunlight and smoke. Free radicals attack healthy cells, damaging their membranes, DNA and other components and compromising normal cell function.

While the body produces CoQ10 on its own, levels decline over time, with a steady decrease beginning after age 30. Factors such as aging, genetics, and cholesterol-lowering statins can lead to a CoQ10 deficiency.

Ubiquinol is a reduced form of CoQ10 (ubiquinone). It is the form which is directly used in human metabolism as a lipid-soluble antioxidant.*

Nutrition Facts
60.0 servings per container
Serving size
Amount per serving
Calories10
% Daily value*
Total Fat1g2%
*The % Daily Value (DV) tells you how much a nutrient in a serving of food contributes to a daily diet. 2,000 calories a day is used for general nutrition advice.