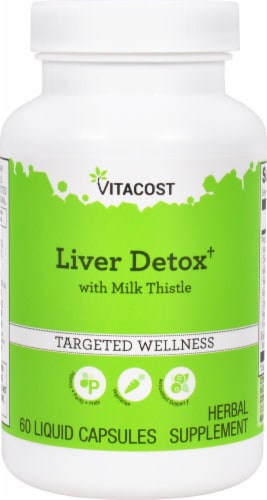 What is Liver Detox*?

Liver Detox is a unique, proprietary blend of herbs that have been well-researched for their hepatoprotective properties.* Included are the following:

Milk thistle: Introduced to North America by European colonists; now established in the eastern U.S. and California. Used for health purposes since ancient times. The active ingredient is silymarin, a mixture of flavonolignans, silydianin, silychristine and silybin.

Yellow dock root: A 4''-tall perennial herb indigenous to Europe and parts of Africa that now grows worldwide. For centuries, herbal practitioners have used the roots of the various genus of dock as a therapy for blood and liver health and to encourage bowel movements.*

Burdock root:Burdock has been consumed as a vegetable and beverage in Taiwan and Japan for decades. Traditionally used in folk medicine as a diuretic and liver aid.*

Red root: Also known as Ceanothus; widespread in North America. Emits a notable wintergreen scent and grows roots bearing nitrogen-fixing fungi. Has a history of use for challenges affecting the lymphatic system, as documented in several herbal books.*