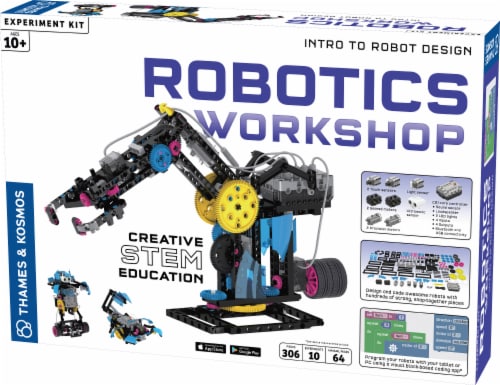 Build and program robots with this complete robotics engineering system. Using sensors, motors, a core controller, and hundreds of snap-together building pieces, you can follow the instructions to assemble ten different robots. The versatile parts also allow you to make robots according to your own designs. This fun robotics curriculum starts out with instructions for building simple robots, teaching you how the sensors can be used to control the robots. Build an ultrasound robot that can avoid obstacles, a drawing robot, and a touch sensor robot. Move on to more complex robots that have multiple functions, such as a ball-shooting robot, a crawling robot, and a grabbing robot. Build a robotic arm that can pick up objects, a butler robot, a robot that will turn toward a light source, and a cool scorpion robot. After you have mastered all of the robotic models in the instructions, you will have the tools and knowledge you need to go on and build and program your own amazing robotic creations. The robots can be controlled directly in realtime and programmed to perform series of commands using an easy-to-use, free downloadable app on iOS or Android® tablets and Windows PCs. The mobile app wirelessly connects to the core controller using a Bluetooth low energy connection. The PC app connects to the core controller via a USB cable. The app uses the open source visual block programming library Google Blockly to make coding fast and easy to understand. A 64-page, full-color manual features step-by-step illustrated building instructions and instructions explaining how to program and operate all of the robot models.