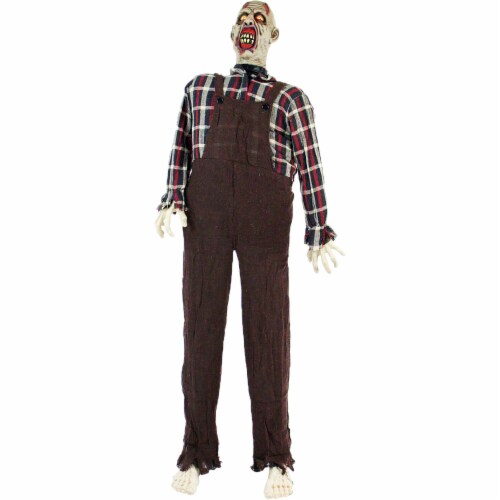 Freddy the Zombie is as fearsome as it gets. This beast has an insatiable appetite, and he’s ready to feast this Halloween. As victims approach, his body rotates on his stand as he surveys his new snacks. His eyes flash red with wicked excitement while he releases menacing moans and clanking chain sounds. Freddy’s most frightening feature is his face. His mouth is stretched wide in a hungry toothy growl, exposing yellowed teeth, thick red gums, and a black interior. His bulging yellow eyes stare with a severity that will shock even the bravest of souls. Graying wrinkled skin envelops his wounded head and gives the zombie a rotting appearance. Suspend him from his included hanging loop or prop him next to your holiday treats to greet unsuspecting guests. Dressed in a plaid button up and overalls, Freddy is ready to get his hands dirty.