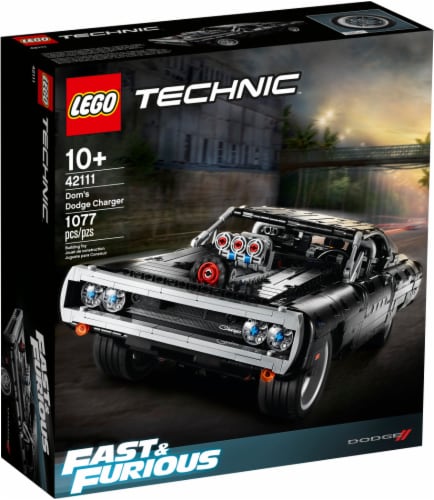 Give fans of Fast & Furious the ultimate thrill with this LEGO® Technic™ Dom’s Dodge Charger (42111) building set for kids and adults. Based on the iconic 1970s Dodge Charger R/T, it’s packed with authentic details. The opening hood reveals a model version of the iconic V8 engine. Other cool features include moving pistons, wishbone suspension, steering system and air blower. There are even nitro bottles in the trunk to bring Dom's daring high-speed chases to life. Just like the real thing! Fans aged 10 and up will love building their very own replica model of Dominic Toretto’s famous car. After building the Dodge Charger, the fun ramps up as fans role-play classic scenes from The Fast and The Furious movie, bringing the adrenaline-fuelled world of street racing to life. Awesome building toy for creative play The LEGO Technic universe offers advanced building toys for LEGO fans who are ready for their next building challenge.